Sweden’s nine-year ‘investigation’ into Julian Assange is the complete and final collapse of an attempted judicial frameup.

“The Swedish Prosecution Authority (SPA) claims that ‘the evidence has weakened considerably due to the long period of time that has elapsed since the events in question.’

“In reality, the frame-up allegations on which Sweden sought Assange’s extradition stand discredited. The Swedish state has been exposed as a pliant tool of Washington. All that remains is the reality of the US Espionage charges now being used in an attempt to silence Assange for exposing war crimes.”

Marsden said the decision by the SPA had come “just days after United Nations Special Rapporteur on Torture Nils Melzer’s September 12 open letter to Sweden. Melzer’s letter exposed a nine-year campaign by the Swedish state to smear Assange as a sex offender and to deprive him of fundamental legal and democratic rights.”

Melzer’s letter to the Swedish government had declared:

“The medical, factual and circumstantial evidence at my disposal shows that the manner in which Sweden conducted its preliminary investigation against Mr. Assange, including the unrestrained and unqualified dissemination and perpetuation of the ‘rape suspect’ narrative, was the primary factor that triggered, enabled and encouraged the subsequent campaign of sustained and concerted public mobbing and judicial persecution against Mr. Assange in various countries, the cumulative effects of which can only described as psychological torture.”

“Who can now argue with that appraisal?” Marsden said.

“Despite never charging him with a crime, Sweden’s investigation provided a pseudo-judicial pretext for embroiling Assange in the legal system and forcing him to seek political asylum in Ecuador’s London embassy in June 2012 to avoid onward extradition to the US.

“He was then maligned by the media and abandoned by the pseudo-lefts, right-wing feminists and supposed civil liberties advocates based on an insistence that he must face state manufactured rape allegations for which no evidence has ever existed.

“All those who repudiated due process and lined up behind a transparent state frame-up, including Labour leader Jeremy Corbyn, must hang their heads in shame. Anyone who now refuses to defend Assange does so because they share the Trump administration’s goal of silencing one of the world’s foremost opponents of imperialist war crimes, state repression and attacks on fundamental democratic rights.

“The Socialist Equality Party will redouble its offensive seeking Assange’s freedom. Our candidates in the UK general election have made this demand the centrepiece of its campaign and will spare no effort to achieve this goal.”

Marsden is currently contesting the seat of Sheffield Central on behalf of the Socialist Equality Party.

For the formation of a Global Defence Committee to secure his freedom!

The editorial board of the World Socialist Web Site and the Socialist Equality Parties are calling for an international campaign to mobilize the working class, student youth, artists, 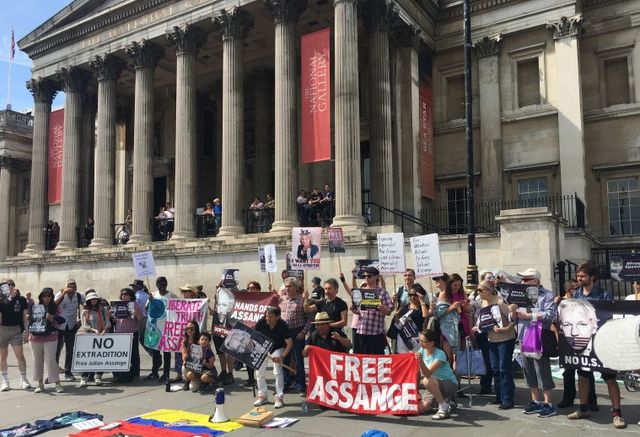 journalists and intellectuals to block Julian Assange’s rendition to the US and secure his liberation.

In the statement, the WSWS wrote:

“The World Socialist Web Site and the Socialist Equality Parties affiliated with the International Committee of the Fourth International call for a global campaign to stop WikiLeaks founder Julian Assange’s extradition to the United States, and to secure both his and whistleblower Chelsea Manning’s freedom.

“Only by organizing protest actions on an international scale—meetings, rallies, demonstrations, and public conferences—will it be possible to frustrate and defeat the plans of reactionary governments, their intelligence agencies and political agents to silence and destroy Julian Assange.

“The aim of this campaign must be to politically arouse and mobilize the international working class—the overwhelming majority of the population and the most powerful social force on the planet—in defense of Julian Assange and, in fact, the democratic and social rights of all workers.” 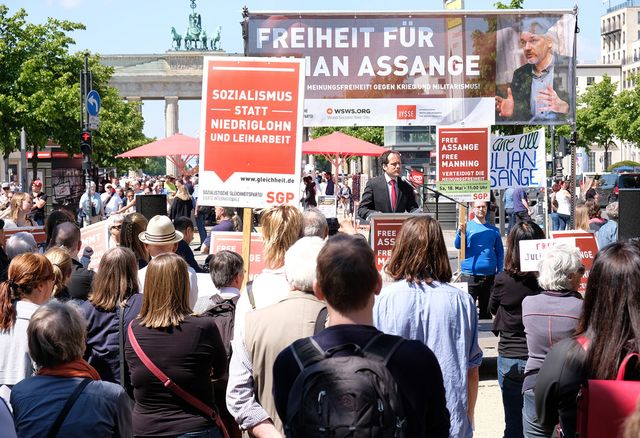 The Socialist Equality Party urges you to read this important statement, share it with friends, family and co-workers and become active in the fight to protect Julian Assange.

You can also download the statement as a colour or black & white PDF leaflet to print and distribute yourself. [A3 colour, A4 colour, A4 b&w]

As the statement points out, “No one who is seriously committed to the defense of democratic rights can stand on the sidelines.” The time to act is now.

Sign up below and join the fight to defend Julian Assange and receive our weekly campaign newsletter!

The following model resolution calls for the immediate and unconditional release of Julian Assange and Chelsea Manning. You can use or adapt this resolution to move at your workplace, college, school, university, union branch or community organisation.

Information and resources to help you campaign for this resolution can be found at Defend Wikileaks and this page.

If you would like a speaker for your meeting, please get in touch. If your resolution is passed, please email a copy to sep@socialequality.org.uk so that it can be published on the World Socialist Web Site and shared via social media.

This meeting of ___________________ condemns the Espionage Act charges against WikiLeaks publisher and journalist Julian Assange. The indictments issued by the US Department of Justice carry a prison term of 175 years, with further charges being prepared.

The conspiracy charges against Assange criminalise core journalistic practices and are a frontal assault on the freedom of the press. He has been charged for exposing US war crimes that led to the deaths of one million people in Iraq and Afghanistan.

On May 31, the UN Rapporteur on Torture Nils Melzer found that Assange has been subjected to “psychological torture” and unprecedented state persecution in violation of his fundamental human rights.

We demand Assange’s immediate release from Belmarsh maximum-security Prison. Since the expiry of his bail sentence, he is being held on remand solely at the request of the United States. We call on the UK government to exercise its veto power to block Assange’s extradition to the United States. We also call for the immediate release of courageous whistleblower Chelsea Manning who has be re-jailed for refusing to testify against Assange.

We resolve to fight for Assange’s freedom and call on [fellow Amazon workers/ rail workers/ bus drivers] to come to Assange’s defence. Freedom of speech, freedom of the press and the most fundamental democratic rights of the entire working class are at stake.

[Insert Date, and place where meeting was held]

The World Socialist Web Site regularly publishes articles about the campaign to defend Assange and Manning, as well as news and analysis of major world events, workers’ struggles, arts, science, history and much more.

The sentencing of Julian Assange: A legal travesty

Julian Assange’s life is in danger